Tanya Sierra’s day starts much earlier than the beginning of the three digital media classes in which she serves as Peer Assisted Learning Specialist for Santa Rosa Junior College Film and Journalism Instructor Brian Antonson.

As a PALS assistant, Sierra is responsible for helping Antonson teach students how to make movies in Media 20: Introduction to Digital Filmmaking and video news stories in Journalism 55: Multimedia Reporting.

It wasn’t that long ago, in 2016, that Sierra enrolled in digital media classes to earn a digital filmmaking certificate, which she received in May 2018. She has now returned to help fellow students learn the art and trade of filmmaking through classes in several digital media specialties.

Sierra graduated in 2012 with a four-year degree from Sonoma State University and enrolled at SRJC to prepare to apply to graduate film programs.

“From screenwriting, editing and single-camera fiction production to multi-camera non-fiction production, they offer it at a minimal cost compared to film programs at four-year institutions,” she said.

Her comments about cost are commonly echoed by other students who say they choose the digital media program that justifies the time, money and commitment required to reach their career goals.

“I suspect the role of community colleges will increase across the country as tuition costs become increasingly unsustainable,” he said.

But tuition cost changes are not the only reasons SRJC’s digital media program is attractive to film students. The college’s broad offering is equally appealing.

“Our technologies continue changing at astounding speeds,” Antonson said. “These changes in production (largely camera technologies, 360-degree cameras, for example), post-production and distribution — how and where we watch media — disturb old norms and create new opportunities. People who are paying attention will be well positioned to use these disruptions to their advantage.”

Mike Starkey, an SRJC instructor who teaches digital video post-production, web and interactive media projects and Adobe Photoshop, stresses how important it is for students to stay current with emerging technology.

“[The changing field] requires an effort to stay current and watch industry trends, which often change every few months. It’s also important to realize that the lines between the roles of a digital media crew are blurring,” Starkey said. “This means that students of digital media should be aware of how film, audio, animation, web, game development, design and interactive multimedia intertwine with each other.”

It’s this media convergence that Jeff Diamond, another of SRJC’s introduction to digital media and web development instructors, focuses on in his classes. His goal is to show students all the tools they can use to tell a good story.

Dustin Zuckerman, SRJC tech gear coordinator, provides students with the tools they need to get their stories told. Zuckerman says SRJC media students will soon have access to cutting-edge technology when new digital media suites open on the first day of spring 2019 semester in Doyle Library on the Santa Rosa campus.

The suites available are a recording studio with a sound booth and mixing studio; a green screen room; a screening room, a virtual reality lab with four stations and a web design, animation and photo room with six stations. They will be available to students enrolled in digital media classes; students not registered in the program will have their skills vetted by an instructor to gain access.

Mike Traina, an SRJC film and media instructor and Film Fest Petaluma director, said, “Filmmakers need to know their audience like never before and really target a particular market segment. New technologies like virtual reality will radically reinvent filmmaking as we know it. It’s exciting because we’re in the process of inventing a whole new art form.”

SRJC’s investment in its digital media program is apparent, particularly to Sierra, whose time on campus has allowed her to explore different disciplines and define her path into the industry.

She hopes to be accepted to a graduate film program in fall 2019, complete a Master of Fine Arts in film and television production and land a job in the field afterwards.

“Graduate school was going to be a huge expense, and I wanted to go into it with certainty,” she said. “I had no experience and wanted to take advantage of what SRJC had to offer so I could have completed projects to show in my applications and to be sure that it was even the right field for me.”

Sierra is grateful for the start the college has given her. “The digital filmmaking program at SRJC tends to fly under most people’s radar, but if I manage to make anything of myself in the field, I will owe so much of it to this program,” she said. “This program will teach you everything that you need to know, has tools to lend you and an active community of past and present students working on projects that you can be part of.” 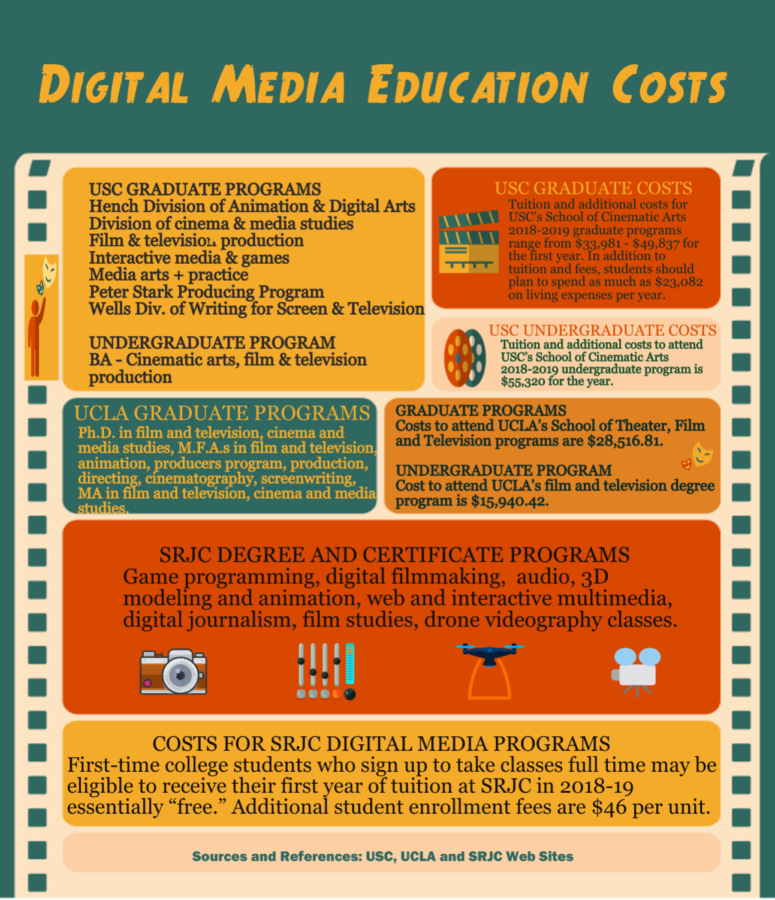 [Startup Bharat] From Surat to Bengaluru, this platform is building a community of designers and photographers

August 13, 2020
QUITO, Ecuador (AP) — A former Ecuadorian president known for his wild antics has been detained in an organized crime… ...

Is Your Rich Media Strategy Up-to-Date or Stuck in the Past?