Home Office Don’t buy beauty products where you get office supplies, and other lessons 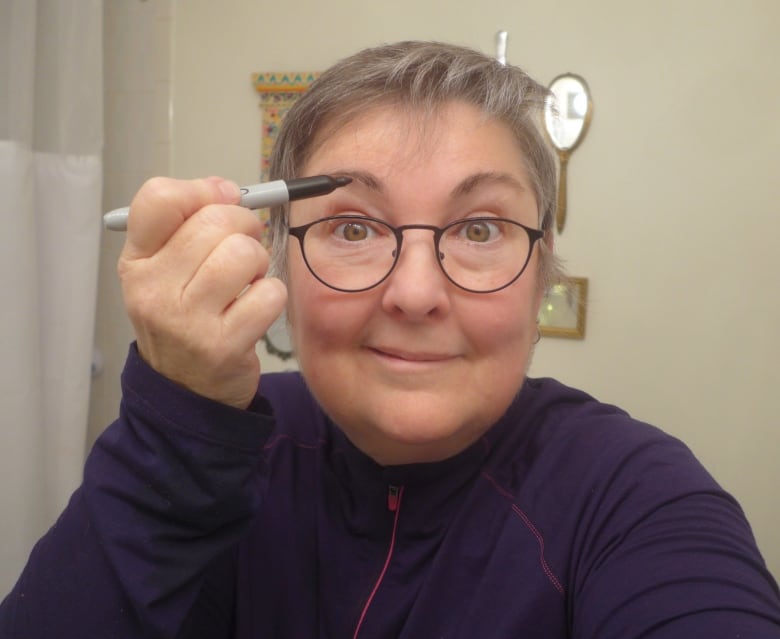 What does a Sharpie have to do with personal appearance? Well, it all depends on how you use it … (Wanita Bates)

There’s a movement out there that recommends you learn one new thing every day.

I’d be lying if I told you I learned even half a year’s worth of new stuff during the last 12 months.

There are, however, a couple of things I can share with you. I’ll let you in on a honest-to-goodness disappearing trick, I’ll take you inside a very intimate “support group” meeting, and I’ll demonstrate how my eyebrows with a mind of their own.

Let’s start with that disappearing trick. It will rock you to you core, but I’m willing to share it anyway.

First of all, what you read in this column stays in the column. Don’t go telling your mother because she’s the one who likely told you not to do this.

How to eat an apple (the right way)

I have nothing up my sleeve when I tell you we’re going to make a whole apple disappear. And this is what  I learned about apples: we’ve been eating them wrong all along.

The foodie magazine Bon Appétit says, “Don’t stop at the sweet flesh. Consume the whole damn apple, core and all.”

Simply said, if you’re not using the seeds, skin and core, you’re eating an apple wrong.

Let’s talk about Wanita Bates and the pips. Pips are what you call an apple seed. The seed contains amygdalin, which when chewed or crushed combined with your gut bacteria is converted into hydrogen cyanide.

Evolution has designed the apple seed to pass through our guts undamaged. Besides, you would need to eat more than 5,000 apple seeds to do any damage. You’d also need to grind those seeds into a fine powder and then swallow them.

Although, thinking back, I think my mother told me if I ate the seeds, I’d grow an apple tree in my belly. I’m still researching this one.

So, here’s how to eat an apple. (See the video as I devour one completely.)

In the meantime, I am putting my green Ikea apple corer on Kijiji if any of you apple wasters are interested.

Welcome to my ‘support group’

As the Christmas party season approached, I decided to get myself one of those back-fat-flattening camisoles.

I’m talking an elasticized garment that will do for me what a girdle used to do for my grandmother. Battle my bulge and suck it in!

I did my research, read reviews, looked at the star ratings and placed my order online for my Yummie Tummie.

The parcel arrived the same day a box of Cheese and Onion crisps arrived from Ireland. [Guess which one was opened first? You got it, the crisps!]

I knew I’d have the camisole as backup to help me put the crisps in place. A few weeks went by and the night before I had to get dressed up, I decided to try it on.

Wait a minute. I looked at the little piece of black fabric and thought, did they send me a child’s size?

I checked the label: XXL.

It was mine … and I was going to get into it. Heave away, me jollies, heave away!

I get it up over my head and my arms are now crossed over my head. I feel like I’m being held hostage. I can’t move.

I need more hands. “Help!” I shout to my partner Liz.

She runs into the room, “What are you doing?”

“The Macarena. Now, help me get this on.”

My arms are now free, but I can’t get my hands under the black fabric to pull it down.

Liz is leveraging herself towards the floor and two hands are tugging at the stretchy monster and trying to roll it down.

It takes close to 10 minutes to get it yanked and stretched down my husky girl body. I’m exhausted.

She steps into the bathroom, and gets into the camisole by herself, with no problem.

Well, of corset it doesn’t offer her enough support. She also has no back fat!

Through thick and thin

Eyebrows are the only thing you can get in shape without exercising.

That should be enough for me to love but I’ve had an up-and-down relationship with them over my lifetime.

Your eyebrows can say a lot about you. I noticed this in Grade 7. We’d moved from Manitoba to my home province of Quebec. I was in gym class in Lachute when a girl came over and said, “Are you a Bates or a Kelly?”

Wow, I thought, these are my people. I’m home! “Bates,” I said beaming with pride. She said, “I can tell by your one eyebrow.”

What? I was devastated. Turned out we were cousins, and while she denies the story today, I never forgot it.

I went home and told my totally cool Aunt Irma. It was the Seventies. She got the tweezers out and plucked my unibrow. They now framed my face and I felt great.

A couple of weeks later, I looked at my teenaged face and thought my eyebrows were uneven. I got the tweezers and pushed my face towards the round magnifying mirror.

I plucked a couple hairs from the right brow and then I evened up on the left. For the next 20 minutes, I zealously tweezed hair from both eyebrows, trying to make them even-steven.

I am a comma chameleon

I pulled back from the magnifying glass and look full-on in the big mirror. I now have two tiny commas where my eyebrows used to be.

A few days later, I saw my Aunt Irma and she shrieked, “What have you done?”

When I left my eyebrows alone, they rocked the next couple of decades, no complaints. I was giving Brooke Shields and Madonna face.

I liked my big, dark eye-framing brows, even when thin eyebrows were all the go in the 1990s and 2000s. But, over the last couple of years, I’ve been having trouble with them.

I went to bed one night and woke up with Andy Rooney eyebrows. 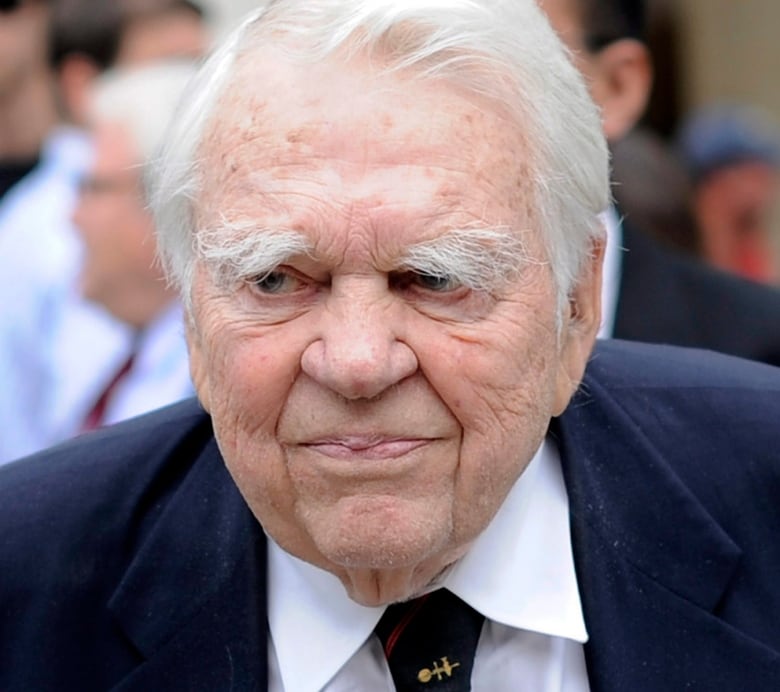 The late Andy Rooney had many opinions, and one of them was leaving his formidable eyebrows alone. (The Associated Press)

While I admired the late 60 Minutes curmudgeon, I didn’t want long white errant hairs coming out of my brows.

Rooney once said, “I draw the line when it comes to trimming my eyebrows. You work with what you got.”

While not many people shop for beauty products at Staples, I did. I bought a narrow and a wide tip black Sharpie, and headed home.

A Sharpie is a permanent marker, it should be able to colour in the white hairs. All went well — until it didn’t.

My hand jerked up over my left eyebrow and now I had a black line running up the side of my face. I considered putting an arrow point on top and printing, “This Side Up.”

I get it up over my head and my arms are now crossed over my head. I feel like I’m being held hostage. I can’t move.

I tried to rub it off but it lived up to its permanent billing. I needed professional help.

I booked an appointment with the Brow Gal. “You used a Sharpie?” she gasped. “Don’t do that!”

One morning I look in the mirror and think, where have my eyebrows gone? I chalk it up to aging.

Another visit with Brow Gal and she says, “Are you plucking out the white ones?”

It’s deja vu all over again. “Don’t pull them out!” I buy stuff to make my eyebrows grow and mascara this time.

I get up in the morning now and say hello to Andy Rooney. 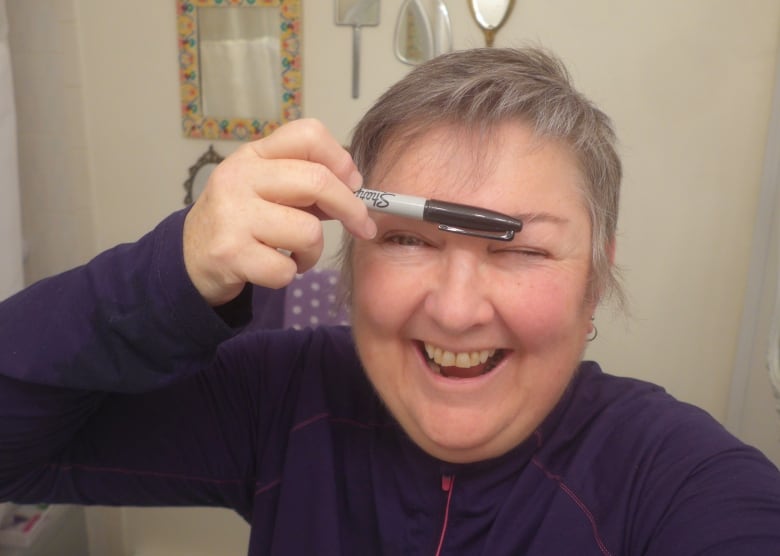 Wanita Bates learned a disappearing trick this year. She believes it’ll rock you to your core … but is willing to share it. (Wanita Bates)

I apply my eyebrow mascara, look in the mirror and say, “How’s it going, Eugene Levy?”

Let me recap what I’ve learned this year. How not to be an apple waster. Repeat after me, “There is no such thing as an apple core.”

How sometimes no matter how much support you get you can always use an extra set of hands.

Next time my eyebrows act up, I’m going Mona Lisa on them.

5 ways to kick-start your franchise journey in 2020

WE CAN to host regional drive-through recycling and reuse event Jan. 11

January 16, 2020
Microsoft has developed an automated tool that relies on artificial intelligence techniques to identify online conversations in which child...

January 16, 2020
Malaysia is a Southeast Asian superpower when it comes to building successful startups, so the number of relevant events we host each year...

January 16, 2020
Back to business. Prince Harry‘s future royal duties might be in flux, but his plans for the Invictus Games are mapped out for...