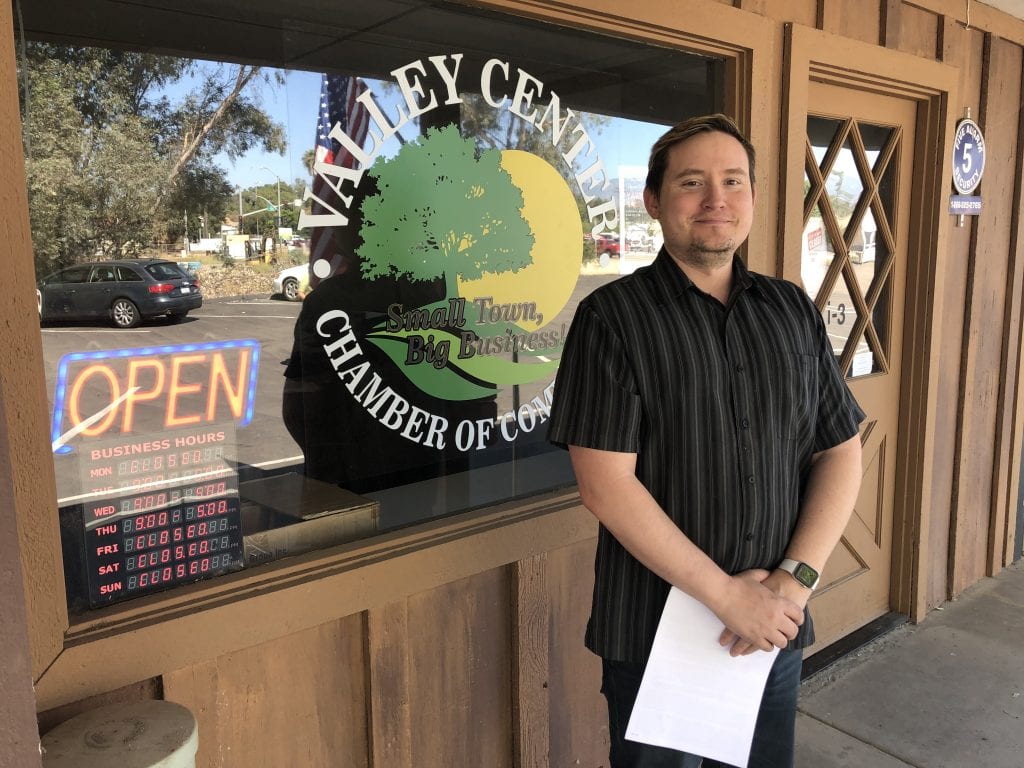 It’s rare enough for a Chamber of Commerce to wage war on one of its business members—but even more unusual for a Chamber board of directors to rewrite the organization’s bylaws for the express purpose of expelling a director who happened to represent that business.

It’s all true. This is how it happened. Note: We have invited and will continue to invite a representative of the Chamber—or the whole board of directors—to submit an article giving the Chamber’s side of this story and we will print it, without editing.

We constantly hear: “There’s two sides to every story.” If you repeat that mantra but never provide your side; that begs the question, “What are you hiding?”

This story is told from the point of view of Joshua Sibelius, who is the advertising executive for the Valley Roadrunner, and Vice President of Operations for Roadrunner Publications, Inc.

Sibelius was first elected to the Chamber board of directors in the winter of 2017 to a two-year term. Before that he was a member of the Chamber ambassadors. That group has often been described as the “worker bees” of the Chamber. They were volunteers who help put on Chamber events and provide willing hands for various jobs that need doing.  All of the ambassadors have since resigned.

This week I sat down with Sibelius to get his story straight from the source.

Q: When did you become aware that all was not right between The Roadrunner and the Chamber of Commerce?

A: Upon entering the chamber board meeting room I felt like The Roadrunner was kind of an elephant in the room and that there wasn’t a positive relationship. It emanated from the air. This was after my serving for a year as an ambassador, when I was trying to maintain friendly relations between the Chamber and the Roadrunner. We wanted to be friendly neighbors with the Chamber. We should coexist as neighbors, I felt.

Q: What sort of questions would the directors demand of  you?

A:  Various questions that only The Roadrunner publisher could answer. There were actions that the company took that irritated them. There was a billing dispute between the Chamber and the newspaper over advertising. They couldn’t understand how I didn’t have influence on the news. Verbally they were not happy and discontented about our news coverage and felt we targeted people in the community—especially Chamber members. They felt I could fix that when it was not my department, in my opinion. There was a letter to the editor that ran that was critical of the Chamber and some of its members [including the Roadrunner!] and which the board felt I should have kept from being run. They said I should have brought it to their attention to review first—and respond. One of the board members, a Realtor, ran a property records search to try to locate the letter writer’s home address. Which I thought was wrong.

Q: About what time did this come to a head?

A: It happened shortly after the longtime Chamber executive director, Mary Gordon, retired.

Q: What event best characterizes the declining relationship between the Chamber and the newspaper?

A: There had been a relationship between the Chamber and the publisher. Where the newspaper ran ads for the Chamber in return for the status as a media partner.

Q: What happened to that relationship?

A: It’s plausible that the Chamber wanted me off the board, for unknown reasons, so it ended that relationship. Since the relationship was gone, The Roadrunner would not have a place on the board, and no representative. To prevent this, we quickly paid our dues and joined the Chamber as a regular member. The publisher had been waiting for years for a formal media agreement, but one never happened. The Chamber originally wanted approximately $10,000 worth of advertising a year in exchange for a $150 membership fee and the Roadrunner logo on their Chamber emails.  Plus a couple tickets to the installation dinner which as media we always got comped anyway. I never thought their proposals were fair.

Q: Where were you when you heard about this?

A: They had a board meeting when the paper was closed for a week, and I was on vacation in the middle of the Caribbean. The publisher was also on vacation. There were people at the board meeting that let us know, who thought this process was kind of fishy. Why take this action when we were both out of town and couldn’t address it right away? I rarely missed board meetings, so this was strategically planned, in my opinion.

Q: So, the ads the Chamber was putting in the paper were suddenly not free anymore. Correct?

A: I was not a part of that process. Everything was audited by email. Invoices were created for ads thought to be owed to The Roadrunner. Those invoices were sent to the Chamber. I had no knowledge of the invoices because they were sent by the publisher. I later printed the emails so that we show which ads were specifically comped.

Q: What happened to the invoices?

A:  I asked the publisher the status of the invoices. I was told they were billing for services rendered and they had the opportunity to pay like any company. Unfortunately, the Chamber has not paid the invoices and they have been sent to collections.

Editor’s note: According to publisher Justin Salter, the Chamber ignored numerous emails, statements and requests to discuss the invoices. The publisher requested a number of meetings with Chamber directors on this issue, without a result. “This left us no choice but to get the debt off our books and sent their account to collections,” he said.

Q: When did you become fairly certain that there was a movement to eject you from the board?

A:  I was asked if I was going to be at a specific board meeting, whose date was moved so I could attend. I felt that was a red flag.

Q: What happened at that meeting?

A: At that meeting the board approved the new bylaws. I was the next agenda item. I was told they had consulted with legal counsel who said I had engaged in unethical behavior. When I asked what behaviors, they failed to provide any specifics.  Then I was told that having The Roadrunner on the board was an inherent conflict of interest. Some board members gave subjective examples, such as “they felt uncomfortable” about having reporters attend their meetings. Things that had never been problems in the past. Nothing objective for meeting their criteria for “unethical” conduct.

Then I was asked if I wanted to resign. Everything felt surreal. I went to a fellow member and asked, “Doesn’t anyone have anything to say to defend me?” You could have heard crickets. I vehemently stated I had done nothing unethical. I told them they would be hearing from an attorney.

I told them I had been elected by businesses in the community and the board would have to vote me off because I had not engaged in unethical behavior. I would not resign. Soon after the vote was taken and it was unanimous. Other board members couldn’t make eye contact with me. What was ironic was that I was told I had made great contributions to the Chamber! With a unanimous vote I felt no reason to make my case. I respectfully disagreed and excused myself.

I was told by one of the directors “Joshua we think you are a really great guy but the problem is your counterpart” which I could only imagine he was alluding to Justin.

Q: What was the nail in your coffin?

A: The Chamber and the publisher had multiple disagreements over websites having to do with a visitors center. The Chamber wanted to do one and so did The Roadrunner. The Chamber had wanted to do one for years, but never acted on it. The Roadrunner offered to fund a visitors center for the Chamber, but it ignored every offer. Bottom line, we had the ability to do one and the Chamber didn’t. Leading up to the vote to eject me, the directors never directly demanded anything. Things happened in a passive aggressive format. There were a lot of decisions made by the executive board that the regular board was not made aware of. The current board of directors really aren’t in touch with Valley Center businesses and can’t understand why their reputation is poor. I was very vocal about how concerned I was as events were poorly attended. Then they axed the Lunch Bunches, Sunrisers and everything except Sundowners. Which were all pretty good social networking events.

Q: When did the board begin work on the new bylaws that were later used to vote you off the board?

A: One of the directors formed a committee to rewrite the bylaws around February. I was concerned because past directors had told me that the Chamber often rewrite bylaws when they want to get rid of a director. The first draft looked as though it focused more on disciplining board members and members of the chamber than benefiting business members. I expressed this opinion and I don’t think some directors appreciated that. I wanted to make sure that Article 6 of the bylaws was being followed. This requires that the proposed bylaws be posted on the internet for the entire membership to be able to read.

Editor’s note: Because of Sibelius’s questions the Chamber eventually submitted the new bylaws to an attorney, who largely rewrote them, but whose draft retained the sections for removing a director.

Q: After you were removed from the Chamber board and contacted an attorney, what was your goal?

A:  Since there was no basis for the charges, all I wanted was a retraction or an apology. A retraction alone would have been adequate. Professional organizations apologize regularly for mistakes made. We are certainly not “living friendly” as had been the new slogan at the installation dinner. But they wouldn’t do that without my signing a non-disclosure agreement. What’s the point of a retraction if you can’t speak about it? Also, more ridiculously, they demanded that the paper agree not to report on these actions, even though I was the only person involved in this dispute. In other words, they wanted to gag the newspaper.

Q: How did you feel about this back and forth between your attorney and the Chamber’s?

A: I feel it’s sad that the Chamber had to use members’ dues and grant money to pay attorneys over this issue. I always felt chamber board meetings that I attended were more for raising money for the chamber, rather than to benefit the businesses. To that note, I don’t recall ever seeing the Chamber’s financials, even though I requested them regularly.

Q: Why do you care that the Chamber board kicked you off?

A: Because they specifically stated from a lawyer memo provided to me that I acted unethically. I care about my reputation as I have great relationships with all of the businesses in town. You know unjust behavior when you see it. This was totally bogus, which I think is proven by the fact that when they were asked to provide proof for their claims, they weren’t able to back them up legally. All the claims made were discredited.

Next week The Roadrunner will quote from the communications between the attorneys for the Chamber and Joshua Sibelius as they tried to come to an agreement that would avoid a lawsuit.

Virgo: Network and get involved to keep yourself well-informed