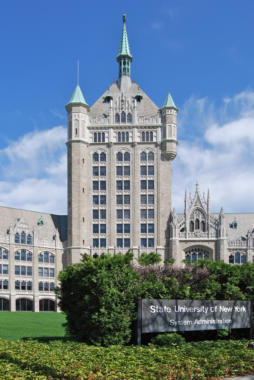 University of Alaska students have plenty to worry about. Gov. Mike Dunleavy’s line-item vetoes made deep cuts to the system’s budget. And separately this month, some 12,000 UA students were told there’s no money for their state scholarships, unless the Alaska Legislature votes to restore funding.

With so much uncertainty, many UA students are considering their options. That’s opened the door to controversial recruiting practices from at least one other university.

That’s how she saw the ad.

“I am just constantly on Facebook,” Anahita said. “So it just came across my newsfeed.”

It was a sponsored post by the State University of New York, or SUNY. A black-and-white photo shows a young woman smiling down at a laptop. The post says this:

“Worried about the future of Alaska’s universities? SUNY is accepting students now. You can bring The State University of New York home with you and complete your degree from a name you can trust, 100% online!” 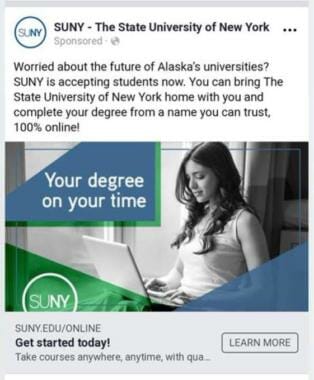 This sponsored post from the State University of New York, which appears to target University of Alaska students, appeared on Facebook in July 2019. After receiving complaints from UA officials, SUNY removed the ad. (Screenshot from Facebook, July 2019)

“Our students are feeling very stressed right now. Students don’t know whether they can continue at the University of Alaska,” Anahita said. “There’s just lots of anxiety and fear. And it sounded to me like the SUNY people were taking advantage of our students’ fear.”

Anahita took a screenshot of the ad and shared it with UAF administration. It quickly made its way to the office of the university president.

Graham confirmed UA President Jim Johnsen called SUNY to express his concern. On July 19, state senator Fairbanks Democratic Sen. Scott Kawasaki shared his own screenshot of the ad, along with a short note calling it “sad” that the governor’s vetoes “have caused outside institutions to target Alaskan students.”

In a written statement, SUNY press secretary Holly Liapis said SUNY contacted the University of Alaska to “extend our regrets regarding the Facebook advertisement.”

What happened this week?

Make sure you didn’t miss anything with The Signal – an insightful (and entertaining) recap of the biggest news in Alaska, delivered to your inbox weekly

NTA CMAT, GPAT Exam Results 2019 to Be Announced on February...