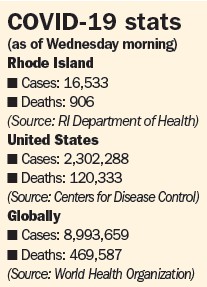 Although the final phase of her economic recovery is pending launch, Gov. Gina Raimondo has outlined the forthcoming changes to prepare Rhode Island residents for the relaxed regulations.

“We aren’t ready to start phase three of our reopening yet, but I want to give you an idea of what the rules will look like when we get there,” she said.

With incidents of coronavirus continuing on a downward trend, there will be no outdoor capacity at parks, beaches, gyms, restaurants, retail outlets, amphitheaters and churches during the next phase. Raimondo, however, said having more than 250 people at a site is not recommended.

“The smaller the group,” she said, “the lower the risk.”

Indoors, the cap will be 66 percent capacity with 6-foot spacing. Venues that operate using their square footage as guidance will be able to increase their capacity by one person per 100 square feet. This includes movie theaters, bowling alleys, arcades and museums. Social gatherings, like weddings and networking events, should be limited to a maximum of 75 people indoors and 150 people outdoors.

According to Raimondo, masks, social distancing, sanitation and screening are “key to stopping the spread of COVID 19,” and these mandates will remain in effect throughout the campaign.

During the weekend, roughly 40,000 people visited state beaches, and Raimondo said she was discouraged about the amount of bare faces on the waterfront.

“One area in which we need to continue to do better is mask-wearing,” she said. “It’s true that you don’t need to wear a mask if you’re able to continuously maintain 6 feet of social distance. But, for example, if you’re at the beach and you leave your spot to go to the pavilion, you should be wearing a mask. Chances are you’re going to come within 6 feet of someone else outside of your immediate group. When that happens, you should have a mask on.”

Raimondo also is asking residents “to be kind and patient” when they are asked by rangers to social distance from other crowds.

“It’s our shared responsibility to do the right thing to keep everyone around us safe,” she said.

While rangers were examining parks and beaches, inspectors at the Department of Business Regulation visited more than 200 businesses across the state. Unlike outdoors, Raimondo said “we’re continuing to do very well with mask-wearing in businesses.” Roughly 94 percent of employees and 90 percent of customers had masks during those inspections.

Raimondo declared a state of emergency March 9 to curb the spread of the coronavirus. Nineteen days later, she issued a stay-a-home order that essentially shut down the economy. That order was lifted May 9 with the launch of phase one, “Testing the Water,” and further restrictions were eased 13 days later with the second phase, “Navigating our Way.” The third phase has been dubbed “Picking up Speed.”

While Raimondo is optimistic about the recovery, she is asking Rhode Island residents to be patient, especially after seeing the surge of beachgoers over the weekend.

“The social gathering size is still 15,” she said. “And you should still aim to keep your social circle limited. You don’t want to see a different 15 people each day. If folks go out now and start acting like we’re in phase three already, we’re going to jeopardize our progress.”

How to get a ‘yes’ from your manager to attend AFIC...